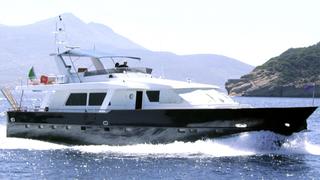 Principessa di Mare is a steel displacement hull yacht built by Dutch yard De Groot Marine to a design by Leen Moerkerk and delivered in 1984. RINA classed, she recently spent two months of extensive maintenance and is now ready for the new season. Accommodation is for up to eight guests in three cabins laid out as a master suite and two twins with Pullman berths. All have en suite bathroom facilities and two crew are accommodated in one en suite stateroom.