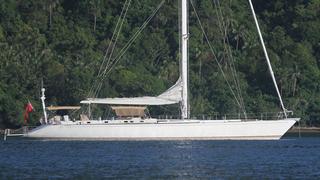 The 26.12 metre sailing yacht Aspiration, listed for sale by Simon J. Turner at Northrop & Johnson in Spain, has had a further $110,000 price reduction.

Built in GRP by Finnish yard Nautor’s Swan to a design by German Frers, Aspiration was delivered in 1998, named Zoom, and at the time was the largest and most powerful Swan ever built. Boasting the typical Nautor quality, she is the epitome of the famed Swan cruiser racer style with wedge decks and long overhangs. Below decks the interior was hand-built with custom care by Nautor’s craftsmen accommodating six guests in a satin teak interior. The accommodation is laid out as three cabins consisting of a master suite, a double and a twin with bunk beds and all with en-suite shower facilities.

Aspiration was sold in 2010 to her current owners and shipped to Asia. Since shipping her to Singapore from Mallorca five years ago, she has been used lightly and principally for the owner’s use — typically within a 300 nautical radius from Phuket in Thailand. The furthest she has been sailed to is Flores & Bali in Indonesia. Under power a 380hp Yanmar engine — new in 2014 — gives her a cruising speed of 10 knots.

This yacht for sale is an accomplished performer and, while a maxi at heart, she is fitted out luxuriously and is by any standards a top-class cruising yacht. Aspiration has commercial status and has made some successful charters but the main emphasis has been on private use and family cruising. The owners are now relocating to Europe and hence the decision to place their beloved Aspiration on sale for new owners to enjoy.