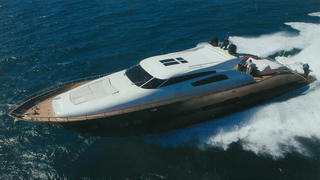 The 27.2 metre motor yacht Spike, listed for sale with Edouard Vignal at Ocean Independence, has had a further €100,000 price reduction.

Built in GRP by Italian yard Tecnomar to RINA class, Spike was delivered in 2008 as a Tecnomar Velvet model and has had just one owner since new. A luxurious interior by Luca Dini sleeps up to seven guests in a full-beam master suite, double and a twin with a Pullman berth, and all cabins have entertainment centres, LCD television screens and en-suite bathroom facilities. In addition, there are two cabins for three crew on this yacht for sale.

The saloon has large windows on both sides and glazing in the ceiling allowing light to flood in. Spike comes with an L-shaped leather settee to port facing an entertainment centre including a 50-inch flatscreen television mounted on a rise and fall mechanism and a Bose stereo surround sound system. Forward is a dining area for six guests and a twin helm station.

The foredeck has large sunpads allowing guests to sunbathe in complete privacy, while her twin 2,033hp MTU engines linked to Arneson surface drive propellers give her a cruising speed of 35 knots, topping out at 40 knots. The engines have logged less than 200 hours since new and she has been stored in a hangar each winter, ensuring an immaculate condition.