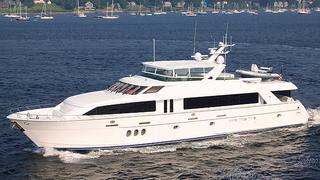 Tom George at Tom George Yacht Group gets in touch to say that the 30.4m motor yacht Jojo’s Circus sold last Friday with the buyer represented by Global Marine.

Hull number 20 in the Hatteras 100′ line, she was built in 2006 and comes fully loaded with all the bells and whistles possible. Accommodation is for 10 guests in five ensuite staterooms while twin 2000hp MTU engines give her a cruising speed of 19 knots. Jojo’s Circus has a large single level flybridge, hot tub and an expansive saloon.

Finally, Tom says she's one for the record books as she sold less than 90 days after coming on the market.