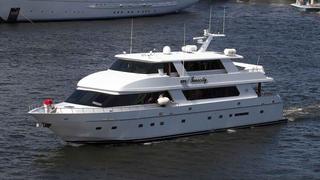 The 33.22 metre motor yacht Bellagio has been sold with Whit Kirtland at Bradford Marine Yacht Sales acting for the buyer and seller.

Built in GRP by Kha Shing- Hargrave to a design by Ben Dodarell, Bellagio was delivered in 2001 as a Hargrave 109’ model. Accommodation is for eight guests in four cabins consisting of a master suite, VIP suite, a double and a twin, all with entertainment centres, television screens and marble en suite bathroom facilities.

The impressive saloon has seating in the lounge area on couches and two club chairs, a Yamaha baby grand piano, bar and an entertainment centre with a satellite television screen on a rise and fall mechanism. A particularly attractive feature is the spiral staircase separating the lounge and formal dining area with seating for 10 guests under an ornate chandelier. The staircase extends through all three decks.

The aft deck is immense and offers seating for up to 12 guests around a custom teak table while the sky lounge is the perfect relaxation area. The sky lounge has three pilot chairs at the helm station and has a bar area to port with four bar stools, a fridge and an ice maker. To starboard is comfortable seating on a couch and two club chairs facing an entertainment centre including a television screen on a rise and fall mechanism.