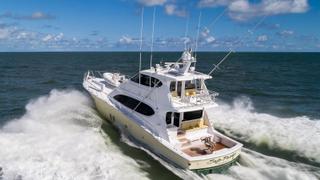 Built in GRP by US yard Hatteras, Safe Passage was delivered in 2010 and has benefited from many upgrades since. A highly versatile cabin layout in high gloss cherry panelling accommodates up to seven guests in five cabins comprising a master suite, VIP suite, twin and two singles. In addition, a further cabin sleeps two crew or could serve as a sixth guest cabin if the yacht is run by an owner/operator. All cabins have entertainment centres and en-suite bathroom facilities.

To starboard in the main saloon is an L-shaped settee finished in chocolate leather. Opposite the settee and underneath the custom marble counter and bar area is a massive flush-mounted flatscreen television and two refrigerator drawers. Forward to starboard is the dining area that comfortably seats six guests with yet another large flatscreen television mounted on the bulkhead.

Up in the skylounge is a raised L-shaped settee in the aft starboard area, while just forward is an office space great for an owner/operator or captain. The cockpit features a teak sole, spacious mezzanine, fighting chair, tuna door, ice chipper, plenty of fridge and freezer space as well as a full helm station located to port.

Twin 2,400hp MTU diesel engines power her to a cruising speed of 23 knots and she is the only Hatteras motor yacht of this size to be fitted with zero-speed stabilisers.