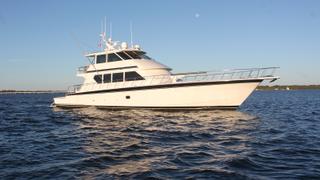 The 25.21 metre sportfish motor yacht Titan, listed for sale by Michael Hartman at Luke Brown Yachts, has been sold with the buyer introduced by Nicholas Scherb at 26 North Yachts.

Built in GRP by US yard Hatteras to a design by Jack Hargrave, Titan was delivered in 1993 and had a major refit in 2017. The refit involved new mechanicals and electronics throughout, along with a completely revamped interior, obliterating her nineties heritage and presenting her as a thoroughly modern yacht. Accommodation is for eight guests in four cabins consisting of an amidships master suite, a VIP suite forward and two twins, all with entertainment centres, LCD television screens and en suite bathroom facilities.

The generous saloon is accessed from the aft deck via a stainless steel and glass sliding door and is furnished with a U-shaped sofa, two armchairs, a teak bar with an ice maker and an expandable table, all facing an entertainment centre including a 55-inch Sony plasma television screen and stereo surround sound. Forward to port is a fully equipped galley opposite a dinette area with a settee seating six guests.

The aft deck comes with a built in crescent shaped upholstered settee, table and three teak chairs along with port and starboard fishing pole lockers. Up in the sky lounge is a hydraulic Stidd helm position seating four, a large L-shaped sofa to port and a starboard ice maker and wine cabinet. Down in the cockpit there is a Murray Brothers fighting chair, hot and cold shower, built in fridge and a barbecue grill. Twin 1,450hp Detroit Diesel engines allow a cruising speed of 17 knots topping out at 22 knots.