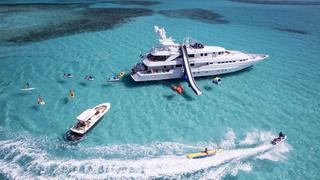 Heesen motor yacht At Last back on the market

Sold as recently as March 2018, the 44.2 metre motor yacht At Last is already back on the market, listed for sale by Kevin Merrigan and Kristen Klein at Northrop & Johnson.

Built in aluminium by the Dutch yard Heesen to ABS class and launched in 1990, At Last underwent a two-year refit in 2009. During the refit, she was taken back to bare metal and totally refurbished. Her most recent refit was in 2017,

In 2014, At Last underwent a complete interior refit by Tui Pranich. Her major components, including electronics and audio/visual systems, as well as all mechanical, electrical and plumbing systems, have also been upgraded. She now boasts a pristine contemporary interior with a striking central spiral staircase that connects all the decks. At Last features a unique octagonal main saloon as well as a large foyer below deck, which are both great spaces for entertaining.

Accommodation is for up to eight guests in four cabins consisting of a master suite with adjoining study, plus three additional cabins, including two mirror-image double cabins, and a forward VIP queen cabin, all with large windows, entertainment centres and en-suite bathroom facilities. The full-beam master suite is set forward on the main deck, allowing for excellent panoramic views.

The sundeck has a large Jacuzzi and a bar, and she has plenty of spaces for al fresco dining. At Last has an extensive water toy selection including one of the best superyacht water slides. These features have made her a popular charter yacht over the past few years.