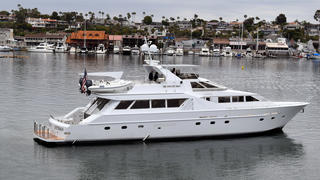 The 28.65 metre Heesen motor yacht The Flying Dutchman has had a central agency change and is now listed for sale by Todd Rittenhouse and Kevin Kramer at Northrop & Johnson.

Launched in 1985, The Flying Dutchman has been completely refitted with almost every sub-system repaired, rebuilt or replaced. As one would expect of a yacht owned by the CEO of a commercial coatings and adhesives company, the paint systems inside and out are impeccable.

The Flying Dutchman features naval architecture and exterior design by Mulder Design with interior design by Art-Line and Susan Allison. She’s characterised by her classic lines and Dutch pedigree and has seen more than $3 million invested in her in recent years.

Her full beam main saloon has a full-service bar, a U-shaped sofa for eight, an entertainment centre and a large dining table that seats eight.

Previously known as Voyager, TheFlying Dutchman accommodates 10 guests in five en suite cabins. The master suite sits amidships and has a king size bed, a walk-in wardrobe, a settee, vanity table and full entertainment centre. It also has his and hers baths with a large Jacuzzi and stall shower. The other guest suites are doubles and en suites, including a spacious VIP room.

The flybridge on this yacht for sale has an upper helm station with a wet bar in the middle and a bench seat to starboard. The sun deck aft has a wrap-around settee and can be shielded from the sun with a canvas canopy.