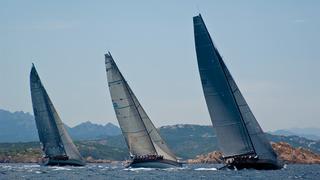 The final day - Fitzroy Race Day - of the Loro Piana Superyacht Regatta, hosted by the Yacht Club Costa Smeralda and organised by Boat International Media, was always going to be a stormer. In the Performance division, the yachts My Song and Aegir had been gearing up for an epic duel all week, while in the Cruising division just four points separated the top seven yachts. The 29m Scorpione Dei Mari was overnight leader, just one point ahead of 38.8m Ganesha, and as the hangovers from the spectacular owners' beach party at Phi Beach last night cleared, the wind blew in from the west...

The race committee was forced to postpone the start sequence in the hope that there would be a lull - and thankfully for the fleet of sailing superyachts taking part, that lull arrived just before 1300. Racing got underway on an 18-mile short course that sent the yachts round Mortoriotto and Soffi Islands with a beat back to the finish off Porto Cervo.

In the Performance division, Lord Irvine Laidlaw's Highland Fling did her customary disappearing act on the first run, but My Song and Aegir got engaged in an epic battle that lasted all the way round the course - just 16 seconds separated the two at the finish. 'We were slightly quicker than Aegir downwind and managed to overtake them,' said America's Cup veteran Tommaso Chieffi, calling tactics on My Song. 'Then we had to keep them at bay. It became a classic match race, using the starboard advantage and the island to keep them at bay.'

'It was quite an interesting day,' commented Aegir's owner Brian Benjamin with classic understatement. 'We almost got back past My Song five or six times - it was good fun, and we gave them a big cheer at the finish. We had a lot of fun today.'

In the Cruising division, Ganesha revelled in the strong conditions and kept a consistent gap over the chasing Scorpione Dei Mari who finished fourth on corrected time today, while the 45m Salperton came charging through the fleet thanks to slick crew work in the manoeuvres to take second. Ganesha's victory meant she overhauled Scorpione in the final standings to take the overall victory, while Salperton's solid day and consistent performance throughout the week gave her third overall.

At the final prize-giving ceremony, attended by HH the Aga Khan, there was a chance for all the crews to catch their breath and reflect on what has been a magical week of sailing in the stunning surroundings of the Costa Smeralda.

Subscribe to BOAT Pro to access brokerage sales data and unlimited specs for 12,205 yachts in our Superyacht Directory – the world’s most comprehensive superyacht data.