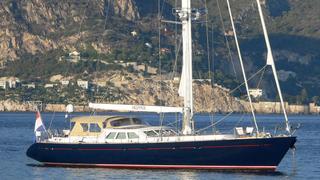 The 30.48 metre custom sailing yacht Skipper, listed for sale by Jochen Brill at Northrop & Johnson, has been sold with Laurent Roussillon from Mysea in Monaco introducing the buyer.

Launched in 2000 by Dutch yard Holland Jachtbouw, she was built from aluminium as the yard’s first fully Lloyd’s Registry certified yacht. Interior and exterior styling is courtesy of Hoek Design Naval Architects and she can accommodate up to eight guests in four staterooms, including a master suite, a double room and two twin cabins. In addition, her crew quarters allow for a staff of up to three people.

Designed to deliver an effortless sailing experience, she boasts countless on-board amenities and a wealth of modern technology, including 11 captive winches controlled from a single console. What’s more, her retroussé stern features a fold-out bathing platform to allow for easy access to the water. Moving inside and rich woodwork creates a warm and classical atmosphere on board, with several built-in seating and dining areas.

Under power her single MTU 6R183TE62 engine generates 375hp for a top speed of 12 knots. When trimmed back to her cruising speed of nine knots, Skipper boasts a maximum range of 4,500 nautical miles drawing on a total fuel capacity of 11,600 litres.