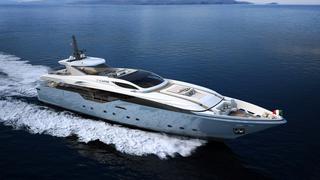 ABS-classed and built to commercial standards, this new all-aluminium superyacht features exterior design by Luca Dini with a classic, French-inspired interior from Dobroserdov Design. The yacht will accommodate 10 guests in five cabins with crew quarters for eight crew members. Powered by triple MTU 16 V2400 M93 engines with Kamewa waterjets, the Admiral 45 will achieve an exhilarating top speed of 28 knots. Special features include a huge sun deck with custom Jacuzzi and an open balcony in the owner’s quarters. There will also be a beach club when the transom is open.

Capri is asking €19.5 million and Sergei says he’s looking for a joint central agent in the UK and USA to help sell the project quickly.