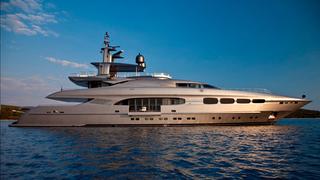 Styled by Cor D Rover and built by Mondomarine in 2009, she's Lloyd's classed and MCA compliant.

An unusually flexible interior layout by Luca Dini makes her ideal for charter use as she can be quickly configured by the crew into three, four or five staterooms accommodating up to 10 guests. Twin 2,480hp MTU engines give Streamline II a cruising speed of 14 knots and for transoceanic crossings she has a range of 4,000 nautical miles at 10 knots.