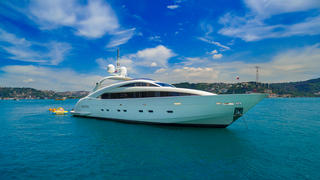 The 36.45 metre motor yacht Canpark has been listed for sale by Richard Higgins at Camper & Nicholsons.

Designed by Andrea Valicelli, she was built in GRP by Italian yard ISA to RINA class and delivered in 2007 as the sixth hull in the yard’s ISA 120 series and the first to utilise water jet propulsion. A luxurious interior in neutral colours by Cristiano Gatto accommodates 10 guests in five cabins consisting of a split level master suite over two decks, a VIP suite, a double and two twins, all with entertainment centres and en suite bathroom facilities. In addition, there are quarters for six crew in three cabins.

The lounge area in the saloon has comfortable seating on settees and armchairs, coffee tables, a bar and an entertainment centre including a 42 inch plasma screen and a Kaleidescape server delivering on demand video and audio throughout the yacht. Forward is a dining area with seating for 10 guests.

However, the emphasis on this yacht for sale is on outdoor living, with extensive deck areas including a sheltered aft deck with table and chairs and an extensive sun deck offering a barbecue, wet bar and a range of sun loungers and pads. The flybridge is similarly well equipped for al fresco entertainment and dining, with a Jacuzzi tub, teppanyaki grill and a Bimini top to ward off the sun.

Triple 2,400hp MTU diesel engines linked to three KaMeWa water jets give her a cruising speed of 30 knots, topping out at 36 knots.