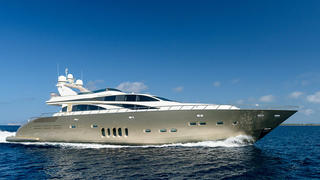 The 32.2 metre motor yacht Ornella, listed for sale by Steen Christensen at Fraser, has been sold with the buyer introduced by Moana Yachting.

Designed by Andrea Bacigalupo, Ornella was built in GRP by Italian yard Italyachts to Bureau Veritas class and delivered in 2006 with a €1.5 million refit in 2015. A restrained interior in high-gloss maple wood provides accommodation for up to nine guests in four cabins consisting of a full-beam master suite, two doubles and a twin cabin with a Pullman berth. All cabins come with entertainment centres, plasma television screens and en-suite bathroom facilities. In addition, there are quarters for five crew.

In the saloon, a large central bar separates the guest area from the raised helm position with three leather bucket seats, while forward of this there is a cosy and private television lounge where the wheelhouse windows serve as large skylights.

The aft deck is an idyllic spot for al fresco entertaining, offering a large table and a settee that converts to a full-length sun lounger. The flybridge features an integrated Jacuzzi situated in the sunbathing area aft. The entire lounge and sunbathing area was refitted in 2015 creating an L-shaped sofa to port and installing a Teppanyaki grill in the dining table.