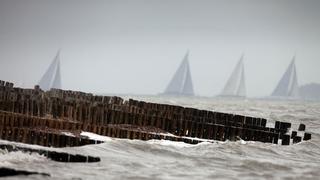 The yachts were very cautious at the start line after yesterday’s early starts. All the Js crossed together, all extremely close, just a few seconds after the gun. Velsheda and Rainbow sailed towards the left of the course while Ranger and Lionheart opted to the right of the course, looking for less tide. The order of the boats was difficult to discern for some time but Ranger looked to be leading, followed by Rainbow, Lionheart and Velsheda. However, Velsheda appeared to get a lift off the Island shore and crossed ahead of the rest of the fleet.

At the Lymington Bank windward mark, Velsheda rounded first, followed by Rainbow, Lionheart, and Ranger fourth. Ranger looked to overtake Lionheart between the windward and spreader mark but was not quite able to do so and Lionheart held her third place.

Heading downwind to the Solent Bank mark, Velsheda, Ranger, and Rainbow carried on inshore while Lionheart gambled; taking a flyer to the left. Lionheart’s risk failed to pay off as she traded positions with Ranger at the next mark, Rainbow held her second place, and Velsheda extended her lead still further.

On the last run from Lymington Bank to Egypt Point, all the boats split gybes, knowing they needed a win and that nothing else would do.

The spectators on Cowes Green were treated to the four Js approaching downwind under their 10,000 square foot spinnakers; the combination of bright sunlight on the sails with dark clouds in the background was a sight never to be forgotten.

The yachts finished at Egypt Point as they had turned the last mark, Velsheda in first place by some distance, followed by Rainbow, Lionheart and Ranger. All the boats finished within three minutes of each other after three hours of racing, an incredible result over such a long course.

Renowned Dutch sailor Bouwe Becking, skipper on Lionheart, declared after racing that today’s was the 'Best race of the series'.

On corrected time the results were:

The yachts line up tomorrow for the Hundred Guinea Cup, recreating the original America’s Cup course East around the Isle of Wight, weather permitting.