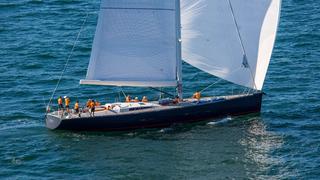 The 25.13 metre sailing yacht Sejaa, jointly listed for sale by Berthon International and Jim Acher at bluewater, has been sold with the buyer represented by Northrop & Johnson.

Built in aluminium by French yard JFA to a design by Judel-Vrolijk, she was delivered in 2002 as a high performance cutter rigged sloop, formerly called Atalanta and last sold in December 2011. A full refurbishment was carried out in 2005/2006 and she has been sensitively cared for ever since. Her interior is modern and minimalist, accommodating up to eight guests in three cabins consisting of a master suite and two twins plus two Pullman berths and all cabins have full en-suite shower facilities.

The saloon has large windows providing plenty of natural light streaming onto the varnished teak wood and natural toned interior, which is equipped with a lounging area, a dining table for up to 10 guests and a sofa with a coffee table.

The winner in her class at the Newport Bucket regatta in 2012, Sejaa has enormous, uncluttered deck spaces along with a sociable double cockpit used both during racing or for al fresco dining when at rest. Under power, a 240hp Yanmar engine gives her a cruising speed of 9 knots.

Her hydraulic transom opens to reveal an expansive swim platform and a large garage for storing the tender. A popular yacht on the charter circuit with a coveted Spanish charter licence, she carries three full sets of diving equipment and six sets of snorkelling gear.