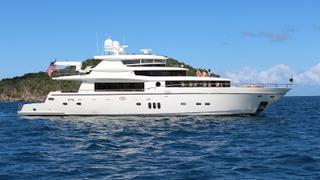 The 28.96 metre motor yacht Go, listed for sale by Kent Chamberlain at Chamberlain Yachts International, has been sold with Robert Ponce at United Yacht Sales introducing the buyer.

Built from a GRP hull and superstructure to a design by Bill Dixon, she was launched by Johnson Yachts in 2011 as part of the yard’s Johnson 87 flybridge series and has been been carefully maintained by her original owner ever since.

Her accommodation is split across three large staterooms, including a main-deck master suite, which offers a king-size bed and an en-suite bath tub. Two generously-sized double cabins on the lower deck complete the layout of the guest areas, while a built-in sofa bed in the saloon takes the total accommodation to seven guests. Meanwhile, the crew quarters allow for a staff of up to four people and all cabins come with their own built-in television screens.

Star features include her main saloon, boasting a large bar, comfortable dining area and 50-inch LG plasma screen television, and her aft deck, which makes good use of her 7.16 metre beam. Moving upstairs and the flybridge has been fitted with a second bar, barbecue, hard top Bimini, Jacuzzi and an eight-person dining area.

Power comes from a pair of 1,622hp Caterpillar CAT C32 diesel engines that propel her to a top speed of 23 knots. When trimmed back to her cruising speed of 12 knots, Go boasts a maximum range of 1,000 nautical miles, drawing on a total fuel capacity in excess of 14,000 litres.