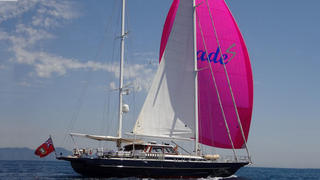 The 28.6 metre sailing yacht Aneta, listed for sale by Manfred Haas at Haas International, has been sold in an in-house deal.

Built in steel and aluminium by Dutch yard Jongert to a design by Doug Peterson, she was delivered in 1985 as a semi custom ketch and last refitted in 2012, including a full repaint. Her comfortable interior by Peter Sijm places the guest accommodation for six persons aft in a master suite and two double cabins, all with entertainment centres, satellite television screens and en suite shower facilities. Forward of the saloon are quarters for three crew in two cabins and a crew mess.

Previously known as Jade S, she was designed and built for long distance cruising and has a bright and airy saloon below with a bar, dining area and an entertainment centre including a television screen. Her well equipped galley, with all the modern appliances, has excellent storage to cope with extended voyages.

On the technical side, she carries Rondal masts and booms, a hydraulically operated furling system in the main mast and Lewmar self-tailing winches on deck. The sail wardrobe was supplied by Quantum and she was offered for sale with her water toys, including a tender and a Bauer compressor for scuba diving.