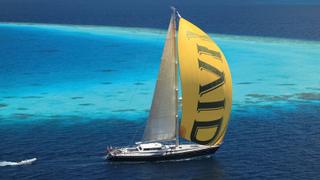 The 26.67 metre sailing yacht Vivid has been jointly listed for sale by Manfred Haas at Haas International and the Sea Alliance group.

Built in aluminium by Dutch yard Jongert to a design by Doug Peterson, Vivid was delivered in 2001 as a Jongert 2700 model. In 2012 she received a €2 million refit and was further upgraded in 2016. MCA compliant, she has a classic interior by Peter Sijm accommodating up to six guests in three cabins situated aft of the engine room consisting of a master suite including a sofa plus two twins, and all cabins have full entertainment systems including television screens and are fitted with en suite shower facilities. In addition, there are crew quarters for up to four staff in two bunk-bed cabins aboard this yacht for sale.

The semi-enclosed deckhouse, with an alternative steering position and a generous open air cockpit amidships, invites al fresco relaxation. For additional fresh air the deckhouse windows may be partly opened at the touch of a button. There is easy access from the deckhouse to the spacious main saloon, where a dining area, comfortable sofas and an audio/visual entertainment centre provide ample space for socialising.

Vivid has a twin steering position in the stern with unobstructed access to the centre cockpit and the deck saloon, and the best possible view over the deck. Her 400 square metres of sail are handled easily by even a small crew with the help of hydraulic winches and furling systems, operable from both steering positions. A single 257hp Scania diesel engine allows a cruising speed of 9.5 knots, topping out at 10.5 knots.

On display at the forthcoming Palma Superyacht Show, Vivid is asking €2,950,000.