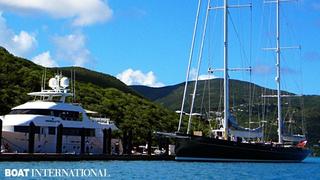 Yesterday saw the conclusion of a nail-biting battle between David and Goliath as spectators at the Transatlantic Superyacht Regatta awaited the arrival in Virgin Gorda of the smallest yacht in the fleet, the 20m Karuba 5 to see how she fared against the largest, the 66m Hetairos.

In the event David won, as Karuba 5 took overall victory on corrected time ahead of Hetairos in second place. Tobias Koenig's Swan 82 Grey Goose of Rorc took third place overall. Hetairos, which was launched in July of this year, claimed line honours having completed her 3069 mile crossing from Tenerife in 8 days, 10 hours, 58 minutes and 30 seconds at an average speed of just over 15 knots. The event was organized by the Yacht Club Costa Smeralda (YCCS) in collaboration with the International Maxi Association and saw eight superyachts and maxi yachts participate.

Vincent Fauquenoy, captain and racing manager aboard Hetairos, was understandably pleased with his crew's result: "It is certainly with great pride that we secured line honours in the race and even who knows, maybe a new speed record for this particular route. On a personal note, having been involved for the last two years in the very complex building process of Hetairos, managing to race her fresh out of the box across the Atlantic also brings me a sense of achievement. Hetairos performed admirably and we all enjoyed very much sailing her. We did not have the perfect wind and had to chase it most of the time but it has been a good training test for the boat and her crew for the next regattas of the season."

‘I am delighted to see this beautiful fleet of sailing giants lined up at YCCS Marina and their owners and crews enjoying a 'sneak preview' of our new Clubhouse which will be officially inaugurated in January.’ commented YCCS Commodore Riccardo Bonadeo during the final ceremony. ‘The level of participants in the event was extremely high and my sincere congratulations go to Hetairos: it not often that a boat fresh from the shipyard wins a transatlantic crossing by such an impressive margin on her first regatta outing. I hope to see her back here, together with the rest of the fleet, in March for the Caribbean Superyacht Regatta and Rendezvous.’