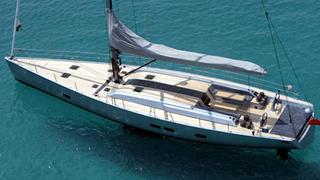 She's a cruiser/racer yacht built by Wally in 2006 in advanced composites with hull design by Farr Yacht Design. This canting keel version of Wally 80 was originally called Shaka and later known as Highland Fling when she underwent serious IRC optimizing with a new high aspect ratio rudder and new deeper canard which was completely re-positioned as well.

Her current owners have made further improvements by lowering the boom and rebuilding the hydraulic system that operates the winches and Magic Trim System which is used for sheeting the main and self tacking headsails.

The interiors of Ryokan 2 are by Lazzarini & Pickering with leather detailing throughout the three guest cabins, all with en-suite bathrooms.