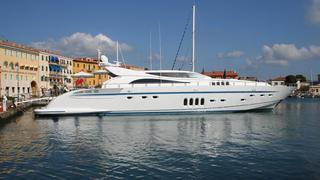 The 34 metre motor yacht Evermina Six, listed for sale by Burgess, has been sold with Pierre Vezilier at MySea acting for the buyer.

Built in GRP by Italian yard Arno to a design by Andrea Bacigalupo, she was delivered in 2008 as one of the yard’s Leopard 34 models and has had only one owner until now. Accommodation in a light and airy interior is for eight guests in four cabins consisting of a master suite, VIP suite, a double and a twin, all with en suite bathroom facilities. In addition, there are quarters for five crew.

The comfortable saloon has a lounge area with port and starboard settees, armchairs, coffee tables, a bar with three stools and an entertainment centre including a large flat screen television set. Forward is the dining area with seating for eight guests on a large settee and four upholstered chairs.

The aft deck has four large sun pads at the transom while further forward is an al fresco dining area around two fixed tables. More sunbathing and dining is available on the foredeck, featuring U-shaped seating, two tables and built in sun pads.

Special features include a large opening top sunroof and the fact that her powerful engines can whiz her guests between Mediterranean hot spots in just a few hours.

Triple 2,400hp MTU engines have logged just 386 hours and, linked to three KaMeWa water jets, give her a cruising speed of 35 knots.

Evermina Six was asking €3,450,000 and will soon be available for charter through MySea.