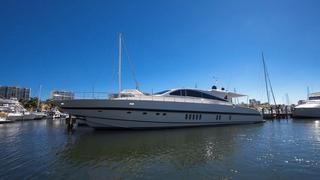 The 26 metre motor yacht Zen, listed for sale by Ralph Navarro at Florida Yachts International, has been sold in an in house deal

Built in GRP by Italian yard Arno, Zen was delivered in 2006 as a Leopard 88’ model. Accommodation is for up to seven guests in three cabins consisting of an amidships master suite with a queen sized bed, a port VIP, again with a queen sized bed and a starboard cabin with three single beds, all with entertainment centres, flat screen television sets and en suite bathroom facilities.

The main deck saloon is arranged with three seating areas, two teak tables, a U-shaped bar with an ice maker and two entertainment centres including flat screen Samsung televisions on a rise and fall mechanism. The area can be flooded with daylight via an electric sliding roof. A further saloon on the lower deck is cosy with a settee and two armchairs facing an entertainment centre with a Samsung HD flat screen television set.

The aft cockpit comes with an island sun bed with an electrically operated table insert and stairways to port and starboard lead down to the swim platform. On the foredeck is another sun bed, sheltered from the sun by a folding Bimini top.

A sleek and sporty yacht, Zen is powered by twin 2,185hp MTU diesel engines linked to Arneson surface drives, giving her a top speed of 42 knots. According to her broker, the previous owner spent hundreds of thousands of dollars upgrading this yacht and she goes to her new owner in turnkey condition.