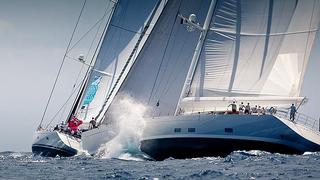 The fleet of 13 racing superyachts attending the Loro Piana Caribbean Superyacht Regatta & Rendezvous were greeted with perfect conditions today as the racing got under way in earnest. Race officer Peter Craig selected course 10, sending the fleet counter-clockwise around Necker Island, Virgin Gorda and Ginger Island for a total of 29 miles under blue skies and with a breeze that hovered between 13 and 17 knots.

The yachts started in reverse order at two minute intervals, with the 29.3m Altair leading the fleet across the line on her start at 1105. It would be a further 24 minutes before the last yacht, Indio, crossed the line on her start. As the yachts headed past Necker on starboard tack, the fleet had already started to compress, with Jim Clark’s J Class Hanuman taking the early advantage by cutting close to Necker and taking the lead on the water as the yachts tacked onto port for the windward turning mark.

By the time the yachts had turned downwind at Pajaros Point – the most easterly point of Virgin Gorda – the fleet had compressed creating an exciting spectacle for those watching and some thrilling on-water battles for position. Hanuman stretched her legs as the kites popped on a run with a true wind angle of 145 degrees, while the 49.7m Zefira, 45m Salperton, 36.6m Bliss, 39m Ganesha, and the 44.5m Lady B – who was racing without spinnaker – stood line abreast. Meanwhile, the later starters – including the 54.6m ketch Marie, 35.1m ketch Sojana, 35.2m F-Class Firefly, 38.1m P2 and 30.1m Indio gradually hauled in the fleet as the yachts passed Fallen Jerusalem, Broken Jerusalem, and Round Rock.

By the time the fleet headed passed Ginger Island to drop the kites for the last windward leg to the finish up by Necker, it was obvious that sail handling would be critical. Hanuman led the yachts through, shooting for line honours, with Salperton – helmed by double Olympic medallist Shirley Robertson – and Indio in hot pursuit. A slow drop on Zefira put her out of touch with the lead group and threw her into the path of the rapidly advancing P2, Sojana, Firefly and Marie.

The last beat proved a test for the tacticians with gusty winds through Spanish Town and several slight shifts. Salperton stood off to the left in the hope of more breeze which didn’t materialise, and at around 1400 it was Hanuman that took line honours, closely followed by Indio three minutes later. Salperton, P2 and Sojana crossed the line shortly after separated by just 54 seconds after nearly three hours of racing.

When the results on corrected time were announced, it was obvious that Indio’s charge from the back had paid off, taking first place on Race One. Last year’s overall winner, the J Hanuman, was second with the Philippe Briand-designed Perini Navi P2 coming in third.

No matter where the yachts finished, though, it was evident that all had enjoyed the outstanding conditions out on the water. ‘I think it went pretty well today,’ said Mark van Gelderen, captain of the F-Class Firefly. ‘It was nice with all the boats together downwind, and in such great surroundings. The owner really enjoyed it, and this was a beautiful wind for a sail.'

‘I go to the YCCS in Porto Cervo which sets a very high standard, and I judge it will be the same here. The event is attracting a lot of big boats and I think this will become one of the fixtures of the West Indian regatta season,’ enthused Peter Harrison, owner of Sojana.

‘We’ve got a couple of new boats in the fleet this year so the competition will be a little stiffer but we’re looking forward to the challenge,' said Kevin Burnham, tactician on Hanuman. 'There’s a big buffer zone between start times so tactically it will be very interesting.'

As the sailing yachts enjoyed a spectacular first race day, motor yacht owners cruised in company to Peter Island for a lunch sponsored by British Virgin Islands Tourism, held at a private villa with panoramic views of the Virgin Islands. Tonight sees the owners enjoy a Louis XIII cognac tasting on board host yacht Icon and the hospitality of Loro Piana at the Loro Piana Owner’s Dinner, while the crews head over to Leverick Bay for a party sponsored by Mount Gay, Parts & Power and Northern Lights.

Subscribe to BOAT Pro to access brokerage sales data and unlimited specs for 12,202 yachts in our Superyacht Directory – the world’s most comprehensive superyacht data.