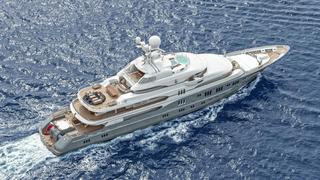 The 78.4 metre Lürssen superyacht TV has changed central agencies and is now listed for sale by Robert Shepherd at Edmiston & Company.

Designed by Espen Oeino, TV was built in steel and aluminium to Lloyds class and delivered in 2008 with a refit in 2011. She went on to become a finalist at the 2009 World Superyacht Awards and featured in the 2010 edition of The Superyachts book.

TV was built to entertain a large amount of guests with plenty of space for different saloons, dining and relaxation areas. She has an array of special features including a very large owner’s deck with its own Jacuzzi and sunbathing areas, and a helipad which also incorporates a fuelling station. Twin 2,682hp Caterpillar engines give her a range of 6,000 nautical miles at her cruising speed of 12 knots and she is fitted with four Quantum zero speed stabilisers.

On display at this week's Monaco Yacht Show, TV is asking €92 million.