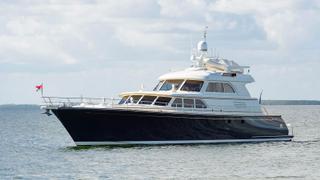 The 25 metre motor yacht Insignia, listed for sale by Skip Denison at Denison Yachting, has been sold in an in-house deal with the buyer introduced by his colleague Bruce Schattenburg.

Built in GRP by US yard Lyman-Morse to a design by Ward Setzer,Insignia was delivered in 2003 and most recently refitted earlier in 2018. An interior in varnished teak with teak and holly soles accommodates six guests in three cabins consisting of a full beam master suite, double and a twin, all with entertainment centres, Samsung television screens and en suite bathroom facilities.

The main saloon occupies the full beam of the deckhouse, with large windows on both sides and forward for uncompromised views. Here, the cabinet makers' art is on display, with varnished Honduras mahogany, book-matched panelling, inlays in traditional nautical themes and teak and holly soles. A settee, armchair and coffee table are to starboard, while a U-shaped settee around a folding dining table occupies the forward end of the room on a raised platform. There is also an entertainment centre including a 48-inch Samsung HD television screen and a Sony stereo system.

Upstairs, the wheelhouse has two L-shaped settees with varnished teak tables set into the aft corners of the room while a central helm seat faces the helm station. Her top speed is 26 knots and she boasts a maximum cruising range of 1,000 nautical miles at 15 knots with power coming from two 1,000hp Caterpillar C-18 diesel engines.