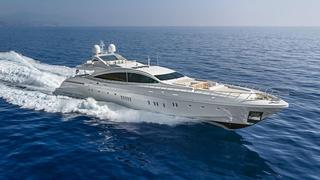 The 49.9 metre motor yacht Apricity has been listed for sale with Moran Yacht & Ship.

Built in GRP by Overmarine, Apricity was delivered in 2014. With naval architecture by Overmarine, her exterior was designed by Stefano Righini. She is the eighth hull in the Mangusta 165 series and is different to the previous Mangusta 165s as she boasts seemingly endless main deck windows, where other yachts in the series have signature teardrop windows. Her flybridge was also restyled with built-in furniture to create a better flow.

The interior was also penned by the yard, but deviates from the form of her sister ships. Inside, the entertainment area on the main deck is brightly lit thanks to the huge side windows and skylights above the dining table.

Entertainment is a key focus,, with a cinema room on the lower deck featuring a 65-inch television screen and secret candy drawers for the most authentic of movie theatre experiences. The room is furnished with a deep wall-to-wall plush sofa and two large leather armchairs.

This yacht can accommodate 10 guests in four cabins, all located in her lower deck, with crew accommodation aft. The full-beam master suite has a broad bathroom amidships. The three en-suite guest cabins have queen size beds and an extra cabin can be created in the cinema room.

Elsewhere on the lower deck, Apricity has a state-of-the-art gym with a hammam, steam shower and en-suite facilities. She is powered by three MTU 16V 4000 M93L engines giving three Rolls-Royce Kamewa waterjets the ability to deliver a top speed of 46 knots.