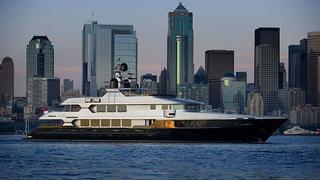 Christian Bakewell at Merle & Associates gets in touch with news that he's listed the 48.76 metre motor yacht Odessa for sale.

Built by US superyacht yard Christensen to ABS class, she is widely considered to be one of the most beautiful Christensens ever built. Odessa’s ultra modern, minimalist interior by Cristina Bernardeau was awarded the Best Interior Design award by ShowBoats International in 2010.

MCA compliant, accommodation is for up to 13 guests in six staterooms in a crisp interior comprising a mix of warm, vertical grain walnut joinery, wide-plank walnut hardwood floors and neutral marbles. All staterooms are equipped with LCD televisions and have full en suite bathroom facilities. Textiles and furnishings by Armani Casa are at once highly comfortable and sophisticated.

The massive exterior deck spaces and generous common areas give the impression that the yacht is much larger than her length. Yet, at just under 500 gross tons, operating costs are more in line with much smaller vessels. Other features include the ability to carry an EC 135 helicopter and an elevator that serves all four decks.