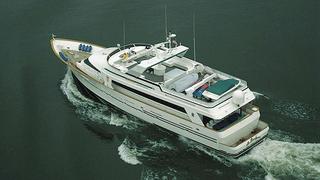 The ubiquitous John Cohen at Merle Wood & Associates sends in the news that he's signed a joint central agency with colleague Simon Croke for sale of the 34m motor yacht R Rendezvous.

This superyacht was built by Christensen in 1992 to a design by Howard Apollonio and features a Glade Johnson interior for six guests in three staterooms. ABS classed, her other features include a large sundeck with Jacuzzi and full walk-round decks. Twin 1475hp DDC engines give R Rendezvous a cruising speed of 22 knots and the asking price has been set at $1.9 million.