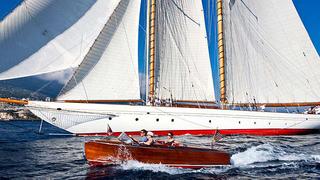 A fleet of 66 classic yachts are lined up to take part in the 2013 Monaco Classic Week – La Belle Classe next week, 11 to 15 September. The biennial event, which dates back to 1994, will be held at the Yacht Club de Monaco, which is celebrating its 60th anniversary this year.

The week promises to be a true celebration of the naval heritage of the principality. The 66 classic yachts in attendance include 12 'Big Boats' (over 25m), 11 period motor yachts, 40 motor yachts – including 26ft Rivas - all of which will be moored in front of the Yacht Club de Monaco and the south jetty. The event will showcase these outstanding vessels in parades and demonstrations, along with the classic yacht races and challenges including those testing manoeuvrability.

In addition, Dutch shipyard Feadship will officially launch the Feadship Heritage Fleet at Monaco, and four of their flagship yachts will take part in the event: 32.9m Santa Maria (1963), 22.5m Serena (1965), 25.8m Sultana (1969) and 32.6m Heavenly Daze, which was launched in 1972 as Aldebarran and will be the committee boat.

France’s only surviving three-mast merchant ship, Belem, will be the guest of honour at the Classic Week. Launched in 1896, the 48m vessel was awarded historical monument status in 1984 and has attracted a large amount of visitors and interest ever since. She is now a training ship and takes part in historical gatherings, armadas and other prestigious events. She will be open to the public on 12, 13 and 14 September for an entry fee of €5, which will contribute to the Belem Foundation, an organisation dedicated to preserving French maritime heritage.

In addition to the racing and showcases, guests will enjoy the onshore social programme, which will include glamorous cocktail evenings and soirees. Some of the world’s finest chefs including Alain Ducasse, Christian Garcia, Pascal Tingaud, and Sébastien Ossetti, will come together on Thursday 12th to judge the chefs competition, in which participating yachts will showcase their chefs’ talents. In addition, the Marlborough Gallery will host a Titouan Lamazou exhibition, while the Hôtel des Ventes de Monte-Carlo is organising the Art de Vivre la Mer Auction of old boats, paintings and nautical objects the following evening.

The week will conclude with the awarding of the Personnalité de la Mer trophy on Saturday 14 September, which recognises men and women who are dedicated to the preservation of the marine environment. The following morning, a prize-giving ceremony will round off the week before the departure of the Trophée Grimaldi Monaco-Villefranche passage race.