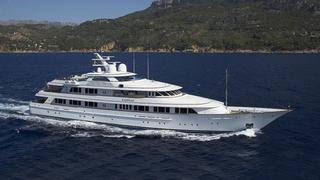 Rasselas was built by the Dutch yard De Vries and delivered in 2005. This modern classic superyacht can trace her ancestry to a number of iconic boats such as Paraffin and Gallant Lady, as well as her earlier namesake, also built for the same American owner.

Her designers, De Voogt, placed special emphasis on creating an extraordinary top deck and outer areas for the yacht. With a classic mahogany interior she is one of the last major yachts with an interior made from this tropical wood. Rasselas sleeps up to 14 guests in a master, four doubles and a twin cabin along with three Pullman berths and all staterooms have en suite facilities. A powerful propulsion package of twin 2,000hp Caterpillar engines gives her a cruising speed of 14 knots and she tops out at 16 knots.

Rasselas was asking $57.5 million and will be renamed Positive Carry by her new owner, who intends to cruise her around the world.