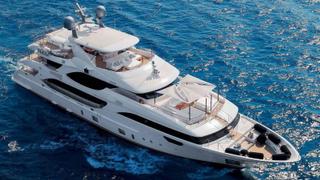 A new 41.94 metre Benetti motor yacht has been sold and delivered to her owner with the buyer introduced by Alex Krykanyuk at Fraser.

Designed by Stefano Righini, the new yacht was built in GRP by Italian yard Benetti to RINA class and recently delivered as hull number eight in the yard’s Crystal series, introduced in 2011.

Notable features include expansive exterior areas and large windows, which provide as much natural daylight as possible inside. Accommodation in a stylish Francois Zuretti interior is for up to 12 guests, with a master suite on the main deck, a VIP suite on the bridge deck and four double cabins on the lower deck, all with full en-suite facilities, as well as five further cabins sleeping up to seven crewmembers.

Designed for private use, she has a spacious sundeck that includes a large zone towards the stern with settees and lounge chairs, while the Jacuzzi is situated further forward. The same deck hosts a television screen for guest entertainment.

Like her sisterships in this series, she comes with a powerful propulsion package: twin 1,600hp Caterpillar engines allow a cruising speed of 14 knots topping out at 15 knots while 58,000 litre fuel tanks enable a range of 4,000 nautical miles at 11 knots. For added comfort at sea and in port, she is fitted with zero-speed stabilisers.

The asking price of the Benetti Crystal has been withheld.