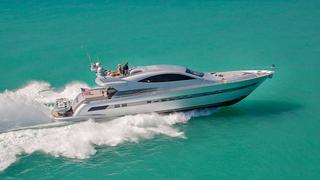 A new build 26 metre motor yacht, the Flyingsport 86, has been listed for sale by Vesa Kaukonen at KK Superyachts in Monaco.

Proposed by the Italian yard CCN, delivery could be made in as little as seven months from the signature of contracts. Naturally, the interior and the exterior finish of this yacht for sale can be fully customized. At present the accommodation layout is configured for eight guests in four cabins consisting of a master suite, VIP suite and two twin cabins, all with television screens and en suite bathroom facilities. There would also be quarters for three crew in two cabins.

The saloon would have joinery in a selection of light woods and would offer comfortable seating, a bar and an entertainment system including a 55 inch television screen and Bose stereo surround sound.

This stylish but functional yacht features two separate saloons on two different levels, and has a convertible table with seating for 12 people and an opening hard top. The aft cockpit has a sunbathing area, seating and a dining table while the bow offers an even larger sunbathing area and a U-shaped sofa, perfect for privacy while in port.

Outside, the sleek flybridge hosts a second pilot station, an extendable dining table aft, a barbecue and a large sunbathing area

Powered by the twin MTU 12V 2000 M94 engines, the Flyingsport 86 can reach a maximum speed of approximately 40 knots and a cruising speed of 35 knots. At the cruising speed, her range is 420 nautical miles thanks to the 6,500-litre fuel tank.