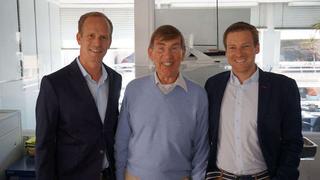 In order to secure the future of his company, Herbert Dahm (aged 85) has now sold superyacht brokerage house dahm international to new owners.

Lukas Stratmann, who has been with the company since 2013, will join forces with Christian Hausser to run the new organization. Stratmann is a former skipper and shipbuilding engineer, while Hausser is an entrepreneur with a background in marketing and communications.

Herbert Dahm now becomes honorary president of the company and will focus on the charter department in conjunction with charter manager Christina Gedamke in Monaco. However, with his wealth of experience and massive contacts book, Dahm will continue to support the brokerage side with advice. The re-organization means that the annual Club Yachting Life sailing regatta in the Balearics has now been postponed to 2015.