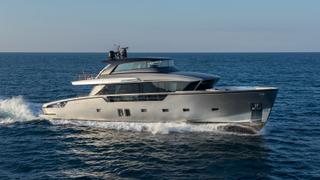 A new-build 27 metre motor yacht, a Sanlorenzo SX88 Crossover model, has been sold to an Asian client with the buyer introduced by Nick Stratton at Simpson Marine in Hong Kong.

To be built in GRP by Italian yard Sanlorenzo with an exterior design by Officina Italiana Design and an interior by Lissoni Associati, the new yacht is scheduled for delivery to Asia in mid-2019. The styling incorporates several new elements, such as an open transom, which allows both a 4.57 metre tender and Jet Ski to be loaded onto a 30 square metre bathing platform via an integrated davit crane. Moving further forward, the reverse-angled windshield adds to the SX88’s explorer yacht aesthetic.

The skylounge is another star feature, with a fixed forward windshield in front of the sole helm position and four-metre long side windows that can be lowered completely. A dedicated lounging area, aft of the mast, is left open to the elements.

The main deck has been designed without a wheelhouse, thus allowing guests to move from the cockpit to the bow with the minimum of obstacles and only two steps. Cutaway bulwarks will help to increase the amount of light permeating this open-plan area, which comprises a saloon, galley and dining area.

Triple Volvo 800hp diesel engines will allow a cruising speed of 20 knots, topping out at 23 knots.

The asking price of the Sanlorenzo SX88 has been withheld but this model usually retails at €5,500,000.