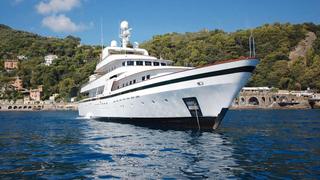 The 41.65 metre motor yacht Il Cigno has had a central agency switch and is now jointly listed for sale by Mortola Yacht & Ship with Edmiston & Company.

This classically-styled motor yacht was built by Italy's Nicolini Shipyard to Lloyd's class and launched in 1985. She accommodates 10 guests in five cabins comprising a master suite, two doubles and two twin cabins, all featuring en suite bathroom facilities. The master suite of this yacht for sale stands out with an oversized Japanese style bath as well as an adjoining private office.

Since her launch, she has enjoyed consistent care, maintenance and refits. She had an extensive refit and rebuild by Pendennis that finished in 2002 and included extending her transom and sun deck, re-modelling the layout of her lazarette, re-wiring work, installing underwater lights, upgrading all her major systems, and completing Lloyd's and MCA compliance work. She then received another less extensive refit in 2006. And in 2010/2011, she had a full technical and mechanical work list completed, leaving her in immaculate condition.

Features include an impressively large saloon which opens up to an exquisite dining area and entertaining area. Il Cigno also provides four couches and a separate circular games table while her entertainment system includes a large screen television set and a range of audio/visual equipment.