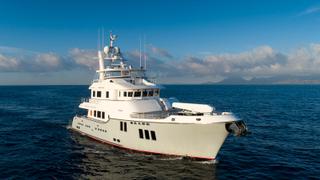 Sold in August 2016, the 26.39 metre motor yacht Gloria Maris is back on the market, renamed Aroha and listed for sale by Y.CO.

Designed by Jeff Leishman, she was built in GRP by Nordhavn to ABS class and delivered in 2010 as a rugged long range cruising yacht. Accommodation is for eight guests in four cabins consisting of two master suites and two VIP suites, one of which can be converted into a twin cabin. All cabins have entertainment centres, flat screen televisions and en suite bathroom facilities. In addition, there are quarters for four crew aboard this yacht for sale.

A generous saloon has comfortable seating on settees and armchairs with a sophisticated entertainment centre including a large Samsung flat screen television set and a Kaleidescape server providing on demand video and audio throughout the yacht. Forward is a formal dining area with seating for eight guests.

The large aft deck provides al fresco entertainment at a table and seating for eight, and leads down to a broad swimming platform set up for fishing and diving, with scuba diving tanks and a Bauer dive compressor.

The well equipped flybridge offers a bar, ice maker, exterior furniture, sun pads and protective awnings as well as a sea balcony. Twin 600hp MTU diesel engines give her a very respectable range of 4,000 nautical miles at seven knots and she is fitted with Trac digital fin zero speed stabilisers.