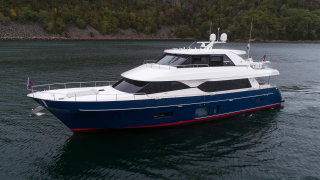 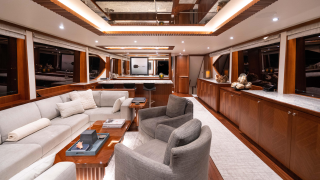 Sold in December 2018, the 27.43 metre motor yacht Off the Grid is back on the market renamed Untethered and listed for sale by Kurt Bosshardt at Denison Yachting.

The saloon lounge area features seating to port and an entertainment centre including a 60-inch LED television screen to starboard. Forward, where one would expect to find a formal dining area, instead has a large walkaround bar. Down a corridor to port is the dining area, offering a large settee and table, ideal for enjoying casual meals or simply enjoying the views through large windows.

The aft deck is floored in teak and offers many happy hours of al fresco entertainment with built-in upholstered bench seating, a teak table and a wet bar plus a waterproofed television screen mounted on the aft bulkhead above the bar. Up on the flybridge are three Stidd helm chairs, U-shaped built-in seating, tables, hot tub, full wet bar and an electric barbecue grill.

Twin 1,600hp Caterpillar diesel engines allow a cruising speed of 16 knots topping out at 20 knots and she is fitted with Vector fin zero speed stabilisers.

Head over to the Virtual Boat Show now for the latest yacht news: