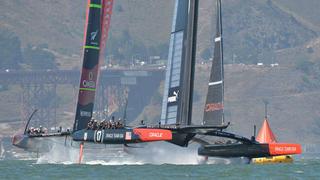 Yesterday could have been the end of the 34th America's cup as Emirates Team New Zealand was one point away from the nine needed to cinch the victory, but Challenger Oracle Team USA won Race 12 extending this action-packed race longer yet.

Oracle Team USA had a six-second jump off lead at the start line and went off to defeat the Challenger by 31 seconds.

'We were able to get a nice jump off the start line,' says USA skipper Jimmy Spithill. 'From there Ben (Ainslie, tactician) and Tom (Slingsby, strategist) sailed a nice race, they had tough decisions to make. The way we sailed the boat was the best we’ve sailed it. We made zero mistakes and it was a very satisfying race for the guys on the boat.'

Race 13 was postponed due to high winds, so Race 13 and 14 are now scheduled to take place today at 1:15pm and 2:15pm Pacific Time. As usual, racing can be watched live on America's Cup YouTube channel. Now Emirates Team New Zealand leads 8 to 2 and still needs one more point to win the 34th America’s Cup, while Oracle Team USA needs to win seven consecutive races to retain the trophy.