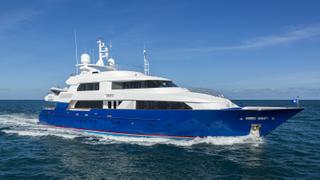 The 39.62 metre motor yacht Unity, listed for sale by Stuart Larsen and Josh Gulbranson at Fraser in Florida, has been sold in an in-house deal.

Built in aluminium by US yard Palmer Johnson to a design by Murray & Associates,Unity was delivered in 2003 and has had just one owner since new. DNV classed and MCA compliant, her A La Mer interior accommodates up to 12 guests in five cabins consisting of a full-beam master suite, VIP suite, two doubles and a twin, all with entertainment centres, television screens and en-suite bathroom facilities. In addition a study/children’s playroom can act as a sixth guest cabin.

The dining saloon is open to the main saloon, separated by a low buffet cabinet. Large windows give this area an airy, open feel and there is an entertainment centre featuring a 42-inch Fujitsu plasma television screen and a stereo surround sound system. Upstairs, the full-beam skylounge has a bar with stools to starboard, a games table aft and couches and a desk to port.

Outdoors, the sundeck is a lovely spot, offering a Jacuzzi surrounded by sun pads, a bar and a barbecue grill, along with U-shaped seating and dining aft. Twin 1,000hp Caterpillar diesel engines power her to a cruising speed of 12 knots and a range of 4,500 nautical miles.