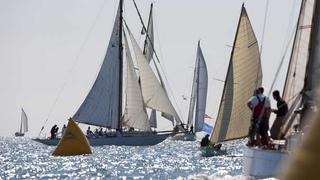 Capricious weather conditions did nothing to dampen the spirits or camaraderie of the owners and crew who were gathered in Cowes on the Isle of Wight for the 2011 edition of the Panerai British Classic Week, along with their fleet of 71 classic and vintage beauties, ranging in size from the 7.4 metre Blue Eagle to the 19.67 metre Italia. Not that size mattered in the least. They were all there for the friendly competitive action on the water and a party or two on shore, courtesy of Panerai in the second year of its association with the regatta.

Gales were delivered on the first day, sadly putting paid to the Round the Island Race, which traditionally follows the course that in 1851 gave rise to the America's Cup. This was followed by a stiff 20 knot breeze on the second day that challenged the competitors, and then the winds shifted from gusty to light to almost non-existent on the other days, with intermittent bouts of rain. Nevertheless, the other races were contested keenly with 1987 America's Cup veteran, the 12 Metre Italia emerging as the winner of Class 1 in the final fifth race of the series that had been closely fought all the way against the other 1985 12 Metre Crusader - the British Challenger for the 1987 America's Cup.

The third 12 Metre in the regatta, John Lister's 1937 Wings topped Class 2 after winning Friday's final race. Dominating Class 3 was Mikado, the 1904 Fife owned by SIr Michael Briggs, which won the final race and finished with a perfect unbeaten score that secured her the title of overall regatta winner. And David Myatt's feisty Bermudan sloop Marguerite comfortably took top honours in Class 4, after winning the final race.

Back on shore competitors unwound in the Panerai lounge, mingled at the bar, chilled out to the sound of the live band in the unofficial marina bar and admired the line-up of classic cars from the Historic Endurance Rallying Organisation (HERO) Summer Trial, which swung by the marina to salute their water-borne counterparts. Crew parties, dinner at the Royal Yacht Squadron and the prize-giving at the Royal Corinthian Yacht Club were all highlights of the social week, helping to foment the fun and friendly atmosphere.

One rather famous competitor this year was Sir Francis Chichester's legendary Gipsy Moth IV, which had been bought by Rob Thompson and Eileen Skinner in October last year when they heard that this important piece of British maritime heritage was in danger of being sold abroad. As teenagers in 1967 they remembered the glory and pride of Chichester's return from his record-setting, single-handed voyage around the globe and were determined to preserve this history and national memory of her for future generations to enjoy. Taking the next step towards safeguarding her future in the UK as a working monument, they chose the occasion of this regatta to announce that they were gifting the yacht to the youth maritime charity UKSA and establishing a new charity, The Gipsy Moth Trust, to support her upkeep, make her accessible to the public and ensure she is used to teach disadvantaged and disabled young people to sail, thereby broadening their horizons.

Gipy Moth IV did not win any line honours, but she did get the 'Je Ne Sais Quois' Award for her Class 3. This award, one of several of the more 'tongue-in-cheek' awards that capture the convivial spirit of the regatta, is given to the boats adjudged by the competitors to have 'that special something'. The Spirit 37 MR3 Choices, 1939 International 8 Metre Athena, St Patrick and 1948 Bermudan sloop Droleen II got the votes in their classes, but the overall winner of the Cetawayo Trophy - and also my personal favourite - was the utterly captivating 1903 Alfred Mylne-designed gaff cutter Kelpie.

Panerai British Classic Week is part of the annual racing calendar of the Panerai Classic Yachts Challenge, which involves over 500 classic yachts and encompasses 10 regattas overall - five in the Mediterranean Circuit, three in the North American Circuit and two unique fixtures - the Antigua Classic Yacht Regatta and this, the Panerai British Classic Regatta. The next date in the calendar is the Corinthian Classic Yacht Regatta in Marblehead, Maine, USA, slated for 12-14 August.