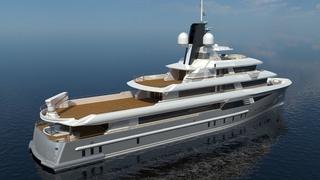 A part-built 49.75 metre explorer motor yacht has been sold by Daniel Dwyer at Ocean Independence to a direct client.

Currently being constructed in steel and aluminium by Greek yard Mega Technica to ABS class as a Cosmo Explorer model, she has an exterior and interior design by Christiano Gatto. MCA compliant, she will accommodate up to 14 guests in six cabins consisting of a master suite arranged over two decks, two doubles and two twins, all with Pullman berths and all with full en suite bathroom facilities.

The upper deck features a huge area aft designed to host an array of tenders and toys lifted by a five ton crane. This area, due to its generous dimensions, can be turned into a perfect setting for a large dockside cocktail party or reception.

Besides the private master suite in the upper deck’s forward section, the yacht’s social areas include a cozy upper saloon with symmetric sofas and coffee tables that can also be used as a television room.

In respect of the long passages and remote destinations the yacht is destined for, the interior is comfortable, calm and relaxing and has massive storage areas and large fuel tanks to cope with extended ocean voyages.

Other features include an observation deck with gym equipment and a Jacuzzi while twin 1,410hp MTU engines will give her a range of 5,500 nautical miles at her cruising speed of 12 knots.