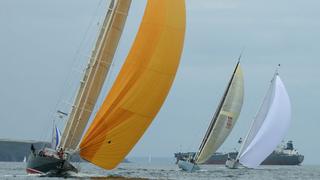 For a while on Friday it looked as if the third race in the Pendennis Cup might not happen. At the scheduled start time there was practically no wind (as was forecast) but, after an hour’s postponement and a couple of seemingly optimistic radio broadcasts from race officer Peter Craig, there was enough of a north westerly to start.

Craig sent the fleet on a relatively short course which most of the fleet – sadly no longer including Athos which has had to withdraw from the regatta with a rig problem – managed to complete in under two hours in a breeze that built to 12 knots at times.

“I wanted to keep it short and make sure we got a good race in,’ says Craig. ‘In hindsight it could have been another forty five minutes, but how many times have we seen the wind shut down with a forecast like that?’

After a beat in towards Falmouth beach, the fleet sailed an anticlockwise course consisting of a close reach, a run past the entrance to the Helford River, a tighter reach – too tight to fly code zero reaching sails, as Breakaway and Unfurled demonstrated – and a fetch, before starting the final beat in to the finish line between Pendennis Point and Black Rock.

Unfurled had taken the lead by then and went on to claim line honours for the third time. Mariette – which once again had started first in this semi-pursuit style of racing – tacked at the last mark and went in towards St Anthony’s Head, while close behind her Mariquita stood on.

“We went on into what we saw was a stronger band of air’, says Jim Thom, Mariquita’s captain, ‘and when we came back we just squeezed ahead of the 40 metre safety zone in front of them.’  By the finish, Mariquita was far enough ahead of Mariette to beat her, and indeed everyone else, on corrected time.

‘I was surprised that we managed to hold our own on handicap,’ says Thom, ‘but this boat does really like flat water and light airs, and it was great to have a run which was deep enough for our spinnaker.’

As if to reflect the wonderfully eclectic mix of boats in this regatta, going into Saturday’s last race the two leaders in Class 2 - both with 7 points - are the 1915 gaff schooner Mariette and the bermudan sloop *Unfurled, *built in 2000.

Mikado had her second handicap win in Class 3, followed by Firebrand, so overall victory will be between those two with Mikado holding a slight advantage.