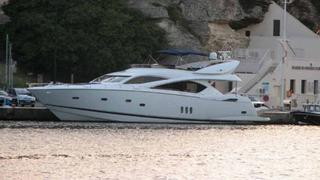 Marco Vandoni at Ocean Independence tells me he's closed on his listing for sale, the 25.1m motor yacht [Martlet](Martlet) with Premier Yachting representing the buyer.

Built by British yard Sunseeker International in GRP to RINA class Martlet was launched in 2003. She has four staterooms sleeping eight guests in total. The forward VIP cabin and master stateroom have en suite bathrooms while the starboard mid cabin and port twin cabin share a double access starboard bathroom.

[Martlet](Martlet) had a comprehensive refit in 2007, during which she received new upholstery throughout, a fresh gloss finish on all woodwork, engines serviced and a ZF gearbox installed. Twin 1,550hp Caterpillar engines give her a cruising speed of 25 knots, topping out at 30 knots.