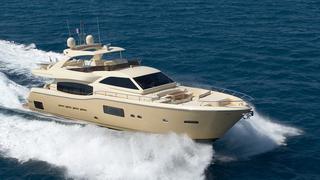 The 25.6 metre motor yacht Tilusa, listed for sale by Julien Solari at The World of Yachting, has been sold in an in-house deal.

Built in GRP by Italian yard Ferretti as hull number two in the yard’s Altura 840 series, she was delivered in 2008 and has had just one owner since new. Tilusa is MCA compliant and has proved to be a popular charter yacht, accommodating eight guests in four cabins. These consist of a full beam master suite, a VIP suite and two twins, all with en suite bathroom facilities. In addition, the crew area has two double cabins equipped with bunks and a bathroom with a separate shower.

The interior of this yacht for sale is attractively decorated, with fine materials that make for a unique and beautifully appointed motor yacht. The flybridge offers generous sunbathing areas, along with the opportunity for al fresco entertaining and dining, with room for as many as 25 guests when in port. The saloon is enormous and open to the lower dining area, with an opening sea window and upper helm position.

The bow area, completely independent, is reached through the dining room and is equipped with a large C-shaped sofa, a central table and several individual chairs, allowing it to be arranged for an ideal capacity of six guests. Twin 1,823hp MTU engines and a planing hull give her a cruising speed of 20 knots and a maximum speed of 27 knots.