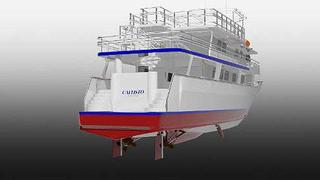 Gary Goldman at Allied Marine brings news of a near-$1 million price drop on the 36m motor yacht Callisto with a tragic story behind it.

Callisto was built by Halter Marine and delivered in 1972, spending the following years in Delaware working as a dinner cruise vessel. In 2006, she was shipped to Alaska and worked for a while as a charter yacht, and in 2009 she was moved to Seattle where she remained until the current owner purchased her.

When purchased in 2010 the yacht spent a year in Seattle and during that time, all unsatisfactory steel plating and frames were replaced with Cor-Ten steel, a Euro transom was installed, and a major structure added to the top deck. In December 2011, Callisto arrived in Panama sailing under her own power. The idea was to re-do the interior in Panama. When work began the owner decided to completely gut the boat and re-do the entire interior from scratch. To date 60 per cent of the hull and bottom have been replaced with new frames and plating. He has a large inventory of all things to complete the boat already purchased, and on site, including all European hardwood veneers, new air conditioning systems, a new electronics suite, new heads and more. Altogether $4 million has been invested in the project.

The tragic part of the story is that the owner is now dying from cancer and is no longer allowed in the sun, so a luxury yacht is completely surplus to his needs.