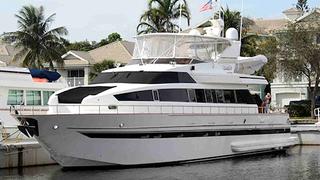 Price cut on motor yacht The Rock at 26 North Yachts

This 26.5m Hershine yacht was built in Taiwan in 1996 and was one of the first Hershines to benefit from improved production and quality-control systems installed by the yard. She boasts four cabins accommodating eight guests, and crew quarters for two. Carrying twin Caterpillar 3412 engines, she cruises at a comfortable 16 knots and has a top speed of 21 knots. New teak decks and new stabilisers were added in 2011.