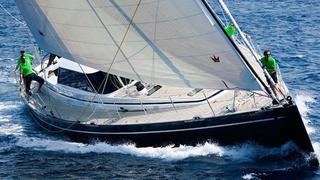 It's yet more price cut news as Jochen Brill at dahm international and Marc Haendle at Ocean Independence announce a further €750,000 cut on their joint listing for sale, the 29 metre sailing yacht Scorpione dei Mari.

Scorpione dei Mari was built in aluminium by Dutch yard Jongert to a design by Tony Castro and launched in 2005, going on to become a proven regatta winner. Accommodation is for up to seven guests in a master suite and two twins, one with a Pullman berth. As a bonus, she comes complete with a full racing and cruising sail inventory and has been well maintained throughout her history and received a full paint job in 2011.

Handling aboard Scorpione dei Mari is made easy, even with a small crew, due to her configuration with a Hall Spars carbon mast, Park Avenue carbon boom, lazy jack slab reefing, PBO rigging for the inner forestay and backstay and Harken carbon racing winches including a captive winch for the mainsheet.

She can be sailed from the double steering position behind the cockpit from where there is easy access to the stern swim platform. All cruising functions are also comfortably controlled from the navigation area in the inside cockpit, giving 360° degree visibility across the yacht.

Lying in Mallorca, Spain, where her berth is also for sale, Scorpione dei Mari is now down from €5.45 million to €4.7 million.