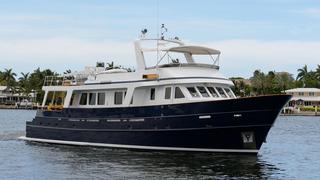 The price of the 25.91 metre motor yacht _Impossible Dream, _listed for sale by Jonathan Chapman at Northrop & Johnson, has been reduced by $100,000.

Built in steel and aluminium by Dutch yard Jongert, Impossible Dream was delivered in 1986 with a full refit in 2007. Accommodation is for up to 11 guests in four cabins consisting of a master suite, a twin to port with a Pullman berth, a double to starboard with an upper single berth and a VIP suite aft with a separate entrance via the cockpit.

The saloon has exquisite sapele wood panelling throughout and has a sofa, table and chairs to port while to starboard there is a bar with a fridge, liquor locker and storage. There is also a concealed plasma television set and a complete entertainment centre.

Up on the flybridge, outdoor entertaining and dining are catered for with a couch, chairs, sun pads and a table while a Bimini top provides shade over the helm station. Twin 250hp Caterpillar engines give her a cruising speed of nine knots and a transoceanic range.

The major refit in 2007 of this yacht for sale included a full redesign of the interior spaces along with the galley moved to the main deck, a VIP cabin and media room added, and the aft deck extended. Finally, the engine room was gutted and redesigned with new generators.